Women news should lose all credibility for publishing this nonsense   As far “Super Bowl Weekend – Where Sex Traffickers Win” by Vednita Carter,    Why are Swerfs (Sex worker exclusionary radical feminism) and Terfs ( Trans-exclusionary radical feminism so willing to throw poor women under the bus just so they can profit off their trafficking NGOs. Every year we prove that there… Read more »

Las Vegas Women March Includes Sex Workers I am a mother, I am a grandmother, I am a great-grandmother, and I am a sex worker. As I stand here today, I look out and wonder how many of us, intentionally or unintentionally, place our boots on our sisters’ necks? That under the crushing weight of patriarchy, we divide, we separate,… Read more »

Women March Rhode Island Includes Sex Workers #WMWRI18   Coyote RI was one of the many local organizations who tabled at RI Women’s March. We had a 60 people sign up for our email list, and over 100 people stopped at our table.  We engaged with strippers from Westerly, and we had students from 3 universities and several communities members… Read more » 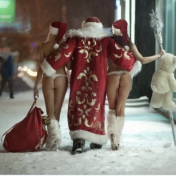