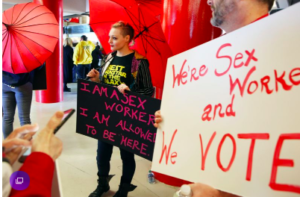 Of the many, many impactful statements made onstage at the Women’s March Power to the Polls event in Las Vegas on Sunday, one stood out for the uniqueness of its voice in the largely mainstream political context: “I am a mother, I am a grandmother, and I am a sex worker.”

The statement was made by Cris Sardinia, head of Desiree Alliance, a national coalition of sex workers and health professionals working toward harm reduction, advocacy, and education. She was the only one of 30-plus onstage speakers to focus on the rights of prostitutes, adult-film stars, strippers, and other sex workers as an issue.

But even as a lone voice in the day’s lineup, she symbolized a powerful shift — as did the noticeable presence of many sex-worker rights activists, who turned out more forcefully than they did for last year’s main Women’s March event. That was due, said many, to a more targeted welcome effort on the part of event organizers. They aimed to right a perceived wrong from last year, as publicized by Janet Mock, over briefly watering down and then removing a sentence embracing sex workers from the Women’s March mission statement, before reinstating it under pressure.

Still, the issue remains a touchy one among women who equate all prostitution and sex work with sex trafficking; activists, meanwhile, see a difference and defend their work as a freedom-of-choice issue.

“I want you to see the sex-worker rights movement as part of the solution and not the problem,” Sardinia said to great applause from the stands of the Sam Boyd Stadium. She took the stage near the end of a four-hour lineup of speakers, when the sea of 20,000 women in requisite pink pussy hats had begun to thin out, most of the day’s clever, anti-Trump and pro-woman signs cast aside after a long, chilly afternoon.

“We are a strong and fierce community made up of every color, every race, every identity, every shape, every economy, every religion, and so much more,” Sardinia continued, before declaring, “I’m a sex worker. And I have the right to be here.”

Dee Severe brought her message to Power to the Polls on Sunday. (Photo: Ronda Churchill for Yahoo Lifestyle) 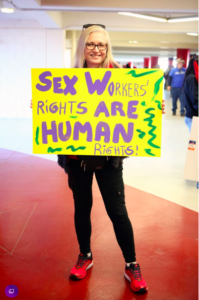 It’s unlikely that most women in the crowd caught her reference to the unwelcome feeling had by many sex workers regarding last year’s Women’s March events. But it certainly resonated with those in the business.

“I think last year [Women’s March organizers] were less on the same page about sex workers,” Lux Lives, a Las Vegas-based pornographic film actress with faded lavender hair who held a sign reading “Sex worker wisdom can change the world,” told Yahoo Lifestyle. “They made it clear they wanted us here this year.”

It’s why she had come to Power to the Polls with her partner, Casey V, to assert her rights, along with a loosely knit group of about 20 others in the sex business. Many others were scattered throughout the crowd, including Amber Batts, who had traveled all the way from Alaska to represent SWOP Behind Bars, a support community for incarcerated sex workers. “I think, finally, sex workers are being afforded the opportunity to be heard,” she told Yahoo Lifestyle. 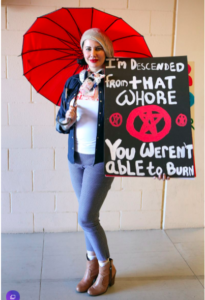 That was particularly true at the local level, according to Deborah Harris, Women’s March coordinator for Nevada — a state that has legal, strictly regulated brothels. “We wanted to make sure sex workers are represented,” she told Yahoo Lifestyle in the days leading up to Power to the Polls. “We want to center our efforts on the most marginalized. And they deserve to be understood and respected.”

The issue of sex workers and their rights is a particularly complex and hot-button issue, though, especially within feminist circles. That’s largely because many equate all pornography, prostitution, and other forms of sex work with human trafficking, or the capture of women and children who are coerced into the trade or sold into it against their will. 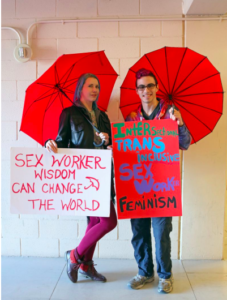 But sex-worker rights activists dispute that all forms of sex work are equal, arguing that they too want to fight trafficking — and that the most effective way to do so is through the decriminalization of sex work, which would theoretically empower coerced sex workers to come forward to authorities without fear of arrest. They also argue that granting women full autonomy over their bodily choices is an essential freedom — no different than the right to use contraceptives or have an abortion (a belief countered by some feminists, who see sex work as inherently nonconsensual because of money throwing off the power balance).

The inclusion of sex workers’ rights by this year’s Women’s March was particularly noteworthy to those in the business — especially after last year’s behind-the-scenes controversy was brought to light by author and activist Janet Mock in a January 2017 Tumblr post. In it, she explained that she had helped march organizers write the mission statement, but that the line she wrote, about sex workers, had been removed, repeatedly altered, and eventually reinstated, due to internal conflicts. 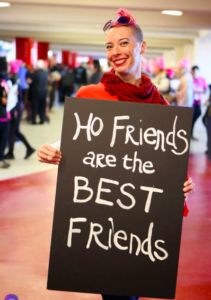 “I helped draft the vision and I wrote the line ‘…and we stand in solidarity with sex workers’ rights movements,’” Mock explained in her Tumblr post. “It is not a statement that is controversial to me because as a trans woman of color who grew up in low-income communities and who advocates, resists, dreams and writes alongside these communities, I know that underground economies are essential parts of the lived realities of women and folk. I know sex work to be work. It’s not something I need to tiptoe around. It’s not a radical statement. It’s a fact.”

She went on: “I reject the continual erasure of sex workers from our feminisms because we continue to conflate sex work with the brutal reality of coercion and trafficking. I reject the policing within and outside women’s movements that shames, scapegoats, rejects, erases and shuns sex workers… There are no throwaway people.”

A Women’s March national spokesperson, Sophie Ellman-Golan acknowledges last year’s controversy, telling Yahoo Lifestyle, “We’re grateful for the sex workers who continue to hold us accountable and push us to be more inclusive. We aren’t fully there yet — we still have a lot of trust to rebuild — but we are making progress. There is always more work to do.” 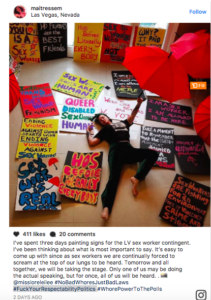 “The intentional inclusion of sex workers in the program and the planning process was a combined effort,” Ellman-Golan continues. “The moment we decided on Las Vegas [known for its Sin City offerings], members of our national team discussed the need to include sex workers on the host committee.” The Nevada team was on the same page, she says, inviting groups like the Sex Workers Outreach Project and Desiree Alliance, although not all local-level organizers were in agreement on the issue.

“There’s still an enormous amount of work to do, and to do it we need to have sex workers at the table,” she says. “That means building a table where all sex workers feel safe and welcomed, and I think we are still in the process of building that table.”

: “…we stand in full solidarity with the sex workers’ rights movement. We recognize that exploitation for sex and labor in all forms is a violation of human rights.”

Also signaling change was the fact that some sex-worker activists operated an informational table at the event, right alongside other organizations such as the ACLU, the Human Rights Campaign, and Planned Parenthood. And at points throughout the day, women holding sex-worker-themed signs and red umbrellas — the international symbol for sex-worker rights — were visible to the entire stadium, as they’d been onstage with other activists as a sort of backdrop for various speakers.

“It was a really beautiful moment to see all those red umbrellas onstage, with a national platform,” Ellman-Golan says.

Dee Severe, who traveled to the rally from Los Angeles, where she directs adult films, told Yahoo Lifestyle she was there because “sex workers are among the most stigmatized, demonized people in the world, and it’s time to be decriminalized.”

Roxy Renee of Las Vegas, who works as a fetish model, said she had come to let people know that “sex workers’ rights are women’s rights.” She added, “We’re all fighting for the ability to make our own decisions.”

While most of the sex workers who spoke with Yahoo Lifestyle on Sunday expressed a feeling of being well received, some said they were left with mixed feelings.

Valerie Stunning, a stripper in Las Vegas who blogs about her experiences and maintains an impressive Instagram following, left the event right after an appearance by Cher, carrying her “Stigma increases violence” sign and walking toward her car with fellow strippers Kelsey Griffith, also of Las Vegas, and Giselle Marie of New York City. Stunning said she had felt repeatedly disappointed throughout the day when speakers would run down the list of all the marginalized groups they supported — from immigrants and transgender women to women of all colors and religions. “They would not say ‘sex workers,’” she noticed.

Still, she said, “It’s really important that we keep coming back. The official statement from Women’s March was validating. It’s empowering when you feel like you’re being heard.”