What it’s like to be a cam girl in the webcam capital of the world.

A new law designed to stop sex trafficking could have some unintended and deadly consequences for sex workers.

Sarah Brady Wagner explains why libertarians make no distinctions between sex work and actual work or what consensual adults choose to do with their dollars.

Authorities claim they are attempting to stop sex trafficking and protect victims, but is that really true? Cenk Uygur and Ana Kasparian, hosts of The Young Turks, break it down. Tell us what you think in the comment section below.

“Texas law enforcement officers have heroically “saved” dozens of “sex trafficking victims” by putting them in jail and plastering their mugshots on Facebook.

This is so cute, Empower at Aids Conference 2018 taking on “condom for evidence laws”

“Bail is the punishment you get, whether or not you’re guilty of a crime.” video – #EndCashBailSystems

The documentary won the first price in section human rights at Amnesty International. The documentary was done by her mother in grief and a French film team. About how social service, the society, the police, the court in Sweden ignore Jasmine and other women in same situations and let the murder stabbed her with a knife 39 times. 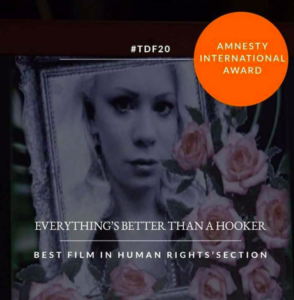 On January 19 and 24, New Orleans police and Louisiana state police raided eight strip clubs on Bourbon Street, the city’s tourism center. Male officers reportedly stood in the dressing room while the women got dressed, took pictures of the undressed women, announced the women’s legal names in front of customers, and made derogatory comments.

Now the workers are fighting back. Last night, hundreds of strip club employees and their allies marched through the French Quarter in a raucous protest.

This is part of what many see as a war on nightlife by outgoing Mayor Mitch Landrieu. He has also proposed shutting the city’s famous all-night bars early, and the city just spent tens of millions of dollars on surveillance cameras all across the city.

The city and state have used the justification of “fighting sex trafficking” for the raids, but no trafficking victims were found. However, hundreds of workers are unemployed as a result of the raids.

This webinar was presented by Elene Lam of Butterfly and Vince Wong of the Chinese and Southeast Asian Legal Clinic and was supported by Nancy Sun of St. Stephen’s Community House. The Migrant Sex Workers Legal Training Project is a partnership between The Chinese Canadian National Council Toronto Chapter (CCNCTO)

“ESPLERP V GASCON Where we are, where we are going and what we need”