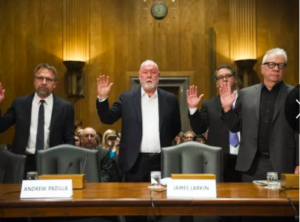 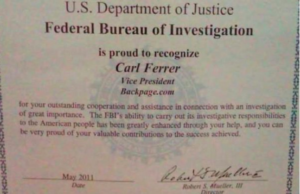 The Cato Institute, ‘Jawboning’ and the Crusade Against Backpage link

No date yet for the new Backpage trial, but it will likely be in 2023. That means a SIXTH calendar year that this prosecution has been hanging over the defendants’ heads (and sapping up government time and resources) link

Lacey/Larkin Appeal Argued at the Ninth, Where the Government Drops ‘Napalm,’ Yet Again link

Oral arguments in the Lacey/Larkin Appeal #backpage around the around 1 hr 34-minute mark. Sept 2nd, 2022  link

The New Campaign for a Sex-Free Internet; Sex, money, and the future of online free speech [link] May 2022

Eschewing independent research, as well as (apparently) the use of Google, Washington Post editor E.J. Graff guzzles the proverbial Kool-Aid in her review of “Taking Down Backpage.” [link] April 13th, 2022

Is There a Constitutional Right to Sex Work? February 1st, 2022

Credit-card firms are becoming reluctant regulators of the web: From sex to free speech, what goes online is increasingly up to financial companies- October 16th, 2021

Jury Selection in Lacey/Larkin Trial Could Wrap Up on Thursday– September 2nd, 2021

STATEMENT FROM MICHAEL LACEY AND JIM LARKIN ON THEIR UPCOMING TRIAL– August 30th, 2021

In the past week, federal Judge Susan Brnovich twice changed the start date of the Lacey/Larkin trial- August 18th, 2021

The Lies This Time August 2021

On April 5, 2021, a Ninth Circuit Appeals Court panel shot down a defense request in the Lacey/Larkin case to order Judge Brnovich’s recusal.

FOSTA IN A LEGAL CONTEXT

The EARN IT Act passes out of the Senate Judiciary Committee– July 2nd, 2020

Prosecutors double-down on unhinged character assassination in the Lacey/Larkin case, urging the trial judge to admit evidence of homicides, in spite of zero links to the defendants.-  May 22nd, 2020

The attorney-client privilege, which protects the confidentiality of communications between counsel and client, is a cornerstone of the American justice system.– May 14th, 2020

HISTORIC—SUPREME COURT – HIV/AIDS nonprofits are challenging a law requiring groups to oppose prostitution to get federal funding– May 5th, 2020

Civil FOSTA Suits Start Showing Up In Court; Prove That FOSTA Supporters Were 100% Wrong About Who Would Be Targeted- January 9th, 2020

Secret Memos Show the Government Has Been Lying About Backpage-August 26th, 2019

INSIDE BACKPAGE.COM’S VICIOUS BATTLE WITH THE FEDS -June 16th, 2019

21 States Inadvertently Tell The DC Circuit That The Plaintiffs Challenging FOSTA Have A Case- May 2nd, 2019

21 States Inadvertently, Tell The DC Circuit That The Plaintiffs Challenging FOSTA Have A Case- May 2nd, 2019

Extra, Extra! All of FPC’s Coverage of the Backpage Case in One Place -April 28th, 2019

How the Feds Are Using Civil Asset Forfeiture to Threaten Free Speech-Sex, publishing, and quasi-legal theft collide in the Backpage prosecution.-February 20th,

READ THE BRIEFS BELOW & CHECK BACK FOR UPDATES.

District Court Misses The Forest For The Trees In Dismissing Constitutional Challenge To FOSTA -Sept 25th, 2018

The Senate Accused Them of Selling Kids for Sex. The FBI Raided Their Homes. Backpage.com’s Founders Speak for the First Time.  -August 21st, 2018

Lawsuit to Stop FOSTA Gets Court Hearing, But Nothing Happens– July 19th, 2018

POLICING BACK PAGE AND THE BACK PAGES- April 19th,2018

On April 6, 2018, Backpage was seized by the United States Department of Justice, and it was reported that Michael Lacey’s home had been raided by authorities.[86] The seizure came in the wake of the passing of the Stop Enabling Sex Traffickers Act (SESTA), which amends Section 230 to explicitly exclude federal or state sex trafficking laws from its immunity. Although the bill had been passed in March, it had yet been signed into law on the day of the seizure. Critics of the bill, which was primarily designed to target Backpage,[87] had argued that the bill was unnecessary because of established case law making websites liable for knowingly facilitating sex trafficking.[88][89][90] Technically the seizure has been performed by the FBI and the nameservers of the domains were changed to “ns1.seizedservers.com” in order to display the authorities seized page.[91

In late March 2018 and early April 2018, courts in Massachusetts and Florida affirmed that Backpage’s facilitation of sex trafficking fell outside of the immunity granted by Section 230 safe harbors. The latter ruling argued that because Backpage “materially contributed to the content of the advertisement” by censoring specific keywords, it became a publisher of content and thus no longer protected.[

Some Comments on the CA/TX Attorneys’ General Prosecution of Backpage’s Executives-  · by Eric Goldman October 13, 2016

Sex Workers Joint statement regarding the harassment of backpage – Nov 2016

Lacey and Larkin were arrested in Arizona by then-Sheriff Joe Arpaio’s office in 2007 for publishing information about a secret grand jury subpoena demanding information on its stories and online readers. They won a $3.75 million settlement from the county government as a result of their now-discredited arrests.