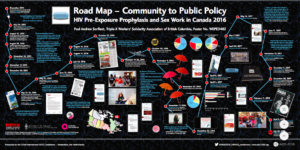 “They Want In”: Sex Workers andLegitimacy Debates In the Law of Public Interest Standing link

The silent majority: The typical Canadian sex worker may not be who we think. link

In 2014, following the Supreme Court of Canada’s Bedford decision, the federal government adopted Bill C-36, The Protection of Communities and Exploited Persons Act (“PCEPA”), continuing the criminalization and stigmatization of sex workers. link

Student sex work is happening, and universities need to respond with health services

Support for decriminalizing sex work is at an all-time high- January 27th, 2021

Wage theft: the missing middle in the exploitation of migrant workers- January 21st, 2021

Vancouver police to prioritize safety over anti-prostitution laws- May 12th, 2018

The Victorian Liberals are looking to favor stringent new laws that will protect the sex work industry, but not those who work in it.–May 11th, 2018

You are here: Home / Know Your Rights / Sex Work

“They Want In”: Sex Workers and Legitimacy Debates In the Law of Public Interest Standing  Dec 2017

Some sex workers choose industry due to benefits of occupation: study– Feb 9th 2017