International Sex Workers’ Rights Day’s history goes back to 2001 when over 25,000 sex workers gathered in India for a festival despite efforts from prohibitionist groups who tried to prevent it taking place by pressuring the government to revoke their permit. Sex worker groups across the world have subsequently celebrated the day as International Sex Workers’ Rights Day.

So in honor of International Sex Workers Rights Day, COYOTE RI decided to inform the public about how the government is deceiving the public with fake sex trafficking headlines so they can continue to scam legislators out of our tax dollars.

These are just a few of the bogus trafficking cases we have seen from people who formed trafficking NGOs and have secured good-paying jobs to combat trafficking.  This means all they have to do is raise awareness about trafficking and the US government will rain down federal TIP funding. This funding prohibits them from advocating for decriminalization which is the only model proven to reduce violence and exploitation. It also prohibits them from working with sex worker-led organisations, such as Coyote RI (Call Off Your Old Tired Ethics)

For example, take Rebekah Charleston aka Rebekah Kay Dean, a.k.a., Nicole A. Wilson.”  She is suing a Nevada brothel, yet there is no record of her ever working in one. One has to get a federal background check, to include fingerprints and get a work permit and see a DR weekly for STI testing to work at any of Nevada brothels, and their boyfriends or spouses are not allowed on the property.  One has to wonder if her boyfriend also brainwashed her to do drugs, and commit all these federal crimes. If she was really a victim why did she try to contact the boyfriend when she got out of federal prison.

Here you can see VALIANT HEARTS  990 for 2016, it looks like Rebecca is really cashing in on her sex trafficking claims. Rebecca claims her salary at Valiant Heart is program services, but it looks like all she does is go to strip clubs and pray for strippers.

This past week homeland security and FL police have ravished media headlines about an FL spa and sex trafficking ring, with women from China, with all kinds of claims. How they had visa’s and had been promised jobs as waitresses. Luckily we have a few good journalists left like Elizabeth Nolan Brown – Reason magazine, who actually research the facts.

What Was Really Going On At Orchids Of Asia?

Not a single person has been charged with human trafficking in connection with multiple sex-trafficking stings in towns and cities on the east coast of Florida, including Jupiter, Vero Beach, and Sebastian. A press release from the Vero Beach Police said Lanyun Ma, the owner of East Spa—where Detective Brock had his penis touched—has been charged with human trafficking. But neither the affidavit nor warrant showed any charges under Florida’s human-trafficking statute. Instead, she is charged with prostitution, deriving support from the proceeds of prostitution, unlawful transportation for the purposes of prostitution, and racketeering.

An Avalanche of Bullshit March 1, 2019, by Maggie McNeill

The Florida Story Teetering on the Edge– March 1st, 2019

Trump cheered Patriots to Super Bowl victory with the founder of the spa where Kraft was busted- March 8th, 2019

Facts: All the women were in the US legally and had massage therapy licensed, which means they were licensed by the state of FL.  The women sit in jail with bonds as high as 200,00, while their only crime was working together to ensure their safety.

This seems to be a trend in law enforcement and government officials lying about sex trafficking.

The Biggest Sex-Trafficking Bust in FBI History Was Totally Bogus How two troubled teens and a cop with a cause got dozens of Somali immigrants on the hook for child sex trafficking.

Why does the media keep publishing fake news? The Boston Globe should be embarrassed that they just published this   Why rich powerful men buy cheap sex

Review: Victims or Not? ‘The Wrong Light’ Looks at a Rescue Group- July 2017

So why does, the government and law enforcement keep lying?

Another reason that the government and the police are lying about sex trafficking, might be because Demand Abolition gave prosectors hundreds of thousands to sign a MOA that they would do stings until they arrested a certain number of clients. This MOA also says that Demand Abolition gets to draft all the police media statements to ensure that they always use the term sex trafficking and not prostitution.

This is probably the biggest scam against taxpayers that we have seen in decades.

The trafficking NGOs are the biggest growth industry other than low paying jobs since the 2009 recession.   In all, 50 of the most prominent anti-trafficking organizations in the United States are estimated to share around $686 million.  What is really amazing is none of them provide direct services to “people involved in the sex industry”   Rescued means you are arrested and at the most, they might find you a bed in a public shelter, where they will abandon you to live in extreme poverty.   These NGO are not going to pay the women’s rent, pay for daycare, or provide them any financial assistance. As a matter of fact, these NGOs are not even out advocating for subsidized housing, or 15 an hr, or for LGBT halfway houses and youth drop-in centers: you know things that could actually reduce trafficking.  They certainly haven’t asked the Church to make predatory Priests stop raping children. In fact, they don’t care about trafficking because their real goal is to abolish porn, prostitution and strip clubs.

Most trafficking victims are simple people under 18 years old, who by state and federal law are classified as domestic sex trafficking victims, even when they are under their own control. In fact, John Jay College was funded by DOJ and they interviewed 1000 youths in 6 cities who were age 13 to 24 who were involved in survival sex. Over 90% of the youth reported that they didn’t have market facilitators or pimps and that they taught each other to find clients while avoiding the police and they went on to say that the state has created so many barriers that they couldn’t access shelter or other vital services.  Youth Involvement in the Sex Trade: A National Study

What they don’t want you to know about is how broken the DCYF system is, and this is just Rhode Island.

So how does RI police raiding 2 spa’s and arresting 13 women in their 50’s and 60’s stop trafficking, and channel 10 news should be ashamed of themselves for publishing the women’s photo’s.  Someone needs to educate the neighbors who went on the news and said it was an unsafe neighborhood because of the spa’s- March 2019

Next, let’s talk about all these other fake facts.

Sex trafficking accounted for 6,081 of the more than 8,500 reported cases of human trafficking in the United States in 2017, according to statistics from the National Human Trafficking Hotline.  What is amazing is that the FBI only confirmed 562 trafficking cases in 2017 for the entire country and that included all labor sectors.  We know that the Non-profit, Polaris Project and the national human trafficking hotline count every incoming call as a tip in trafficking when a huge majority of those calls are poor people looking for resources.

As you can see Polaris Project took in over 12 million and they have 11 million in assets and all they do is run at trafficking hotline. Their 2016, 990 can be found here,

Polaris Project has also developed training for Marriott Hotels, who plan to spend 1/2 million training their staff to “spot trafficking” Who knows why it cost 1/2 million to get employees to read a 36-page online training report

The effects of the Polaris Project in Rhode Island

Well, Coyote RI did the research, over the summer of 2017, Coyote ran a 145 question survey on 1515 US sex workers and we found the average age of entry into prostitution was 22.  (We expect our 8 chapter report to be available by ebook by the end of 2018) 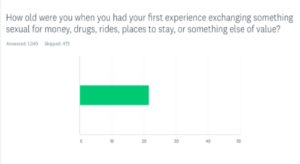 No doubt telling legislators that people are 13 lands you a lot more funding than if you tell the truth, that the majority of “people involved in the sex industry” are poor women who can’t earn a living wage, and about 70% of them are single mothers.

This charity keeps raising money to help young sex-trafficking victims. But where are the victims? July 2017

Coyote RI conducted an after FOSTA survey, as you can see from our impact report, within two weeks of FOSTA passing, many sex workers were forced to take on riskier clients to pay their bills. Many of them were displaced, and screening went down and exploitation and violence increased. 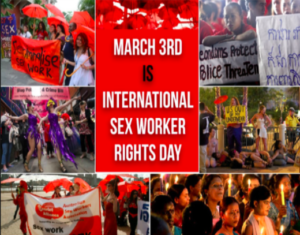 Please consider making a tax-deductible donation to Coyote RI today, so we can continue our research, our outreach and continue to advocate for the health and safety of “people involved in the sex industry”