COYOTE uses multiple ways of advocating for better sex work policies. We are sex worker-led and informed by the experiences of people in the sex industry. We partner with community organizations with similar aims in fighting state violence. Additionally, we work closely alongside academics to understand how research can enrich our understandings of community dynamics and make policy recommendations based on evidence.

One of COYOTE’s academic allies is Dr. Scott Cunningham. He is an economist based at Baylor University in Waco, Texas. We recently spoke with Cunningham about his academic interests in sex work law, his findings, and how he uses his role as a researcher to inform public knowledge.

The foundations for Cunningham’s interest in economics and sex work began while writing his doctoral dissertation at the University of Georgia. He became interested in a broad field of economics and crime, which was pioneered by economist Gary Becker in the 1960s. However, Scott adapted this sub-field from merely understanding deterrents and prevention of crime. After writing his dissertation on how mass incarceration impacted dating markets and risky sexual behavior, he developed broader interests on connections between sex and criminal justice.

And that’s when my research interest changed because it went from being about, you know, descriptive studies to how the internet was reorganizing the market to getting into really consequential policy decisions like “is prohibition harming women? Is it hurting them? And if it is, are there alternatives that could reduce those costs” And I can’t speak for [Dr. Shah] but I came away from that study very distressed and feeling like this was potentially evidenced that this legal regime was very harmful. It created an environment where women were endangered. […] And that was the point where I felt like I couldn’t go back to questions that were less important. And that’s been kind of a permanent change.

Compelled by his research in Rhode Island, Cunningham noted that sex workers had been “saying forever” that the internet’s ability to screen clients made them feel safer. He next embarked on a project to explore whether Craigslist reduced violence against women. A paper published in 2017 by Cunningham, DeAngelo, & Tripp showed that Craigslist erotic services reduced the female homicide rate by 17.4 percent. They suggested that this reduction could have occurred because more sex workers were moving indoors because of the increased ability to screen on Craigslist. He noted that it appeared to be a real statistical association rather than just correlational. The reduction in homicides didn’t show up for other crimes like homicides in general, or even partner homicides. It only occurred in women.

Working on policy issues can be contentious for academics. There is an expectation in the field that social scientists focus on objective analysis rather than confirming pre-conceived beliefs. When asked how he tow’s the line between his research and activism, Cunningham is clear that he is not an activist. He stated:

I’ve always felt like my best use to society is to be a truthful, rigorous, empirical social scientist using the best tools as I understand them. […] I don’t receive funding from anyone. Part of it I would say is I think I have the best use for an activist community by being someone who has a reputation for doing good work. Which doesn’t mean that other social scientists who are doing activism aren’t doing good work, but in my field, it’s scrutinized […] because of how politicized it gets sometimes.

However, Cunningham explained that his work on Craigslist and Rhode Island did change his outlook on how economics can be useful to inform social policy. He noted that he uses his expertise to talk about the dangers of FOSTA, serve as an expert witness in lawsuits involving sex works, and discuss the dangers of legal regimes that do not give women access to supports. Additionally, he disseminates his work to broader communities. He often uses Twitter to talk about decriminalization, prohibition, and problems with FOSTA. He also gives media interviews to discuss his research. While doing this work, he is sure to center the experiences of sex workers: “I give [the media] the names of other sex workers to talk to, too at every opportunity that I have.”

As the effects of FOSTA/SESTA are felt around the country, it is more important than ever for activist networks to develop external partnerships. COYOTE-RI regularly cites work by Cunningham and other social science researchers to inform policy suggestions. Additionally, many of COYOTE-RI’s volunteers are people engaged in academia. It is important to consider the crossover between legal regimes and the impact on people engaged in the sex industry.

Meghan Peterson is Coyote’s Outreach Coordinator. She is a public health researcher and sex worker rights advocate at the Brown University School of Public Health. Previously, she worked on campaigns related to health care access at the AIDS Foundation of Chicago and SWOP-Chicago. She currently researches the effects of incarceration on public health, particularly surrounding overdose mortality and HIV outcomes. Her graduate thesis work focuses on perceptions of drug-induced homicide laws among people who use drugs who are incarcerated. 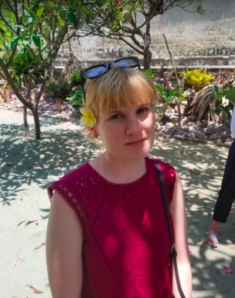