Exploring the groundbreaking study.  Craigslist’s Effect on Violence Against Women

“We can calculate the number of saved female lives using a back-of-the-envelope calculation. Using the year prior to the introduction of ERS (2001) as our base year, we compute the number of total homicides at 1,754 total female homicides in our sample of cities. We then shrink this number by 10 percent which gives us 175 fewer murders as a result of ERS. Multiplying 175 fewer murders by eight years, we estimate approximately 1,400 fewer murders resulting from the introduction of ERS.? Are these magnitudes plausible? It is difficult to answer this question given that the true incidence of prostitution homicides is unknown. Most data sets do not record whether a female victim of a homicide was a sex worker and those that do suffer from severe under-ascertainment biases built into the data collection methods. To our knowledge, there is only one study that has attempted to estimate the incidence of prostitution homicide as a share of female homicides (Brewer et al., 2006). The authors concluded that 2.7 percent of all female homicides are prostitution deaths by clients. But this study has significant limitations. It is based on select data only from Chicago, St. Louis, Washington state, North Carolina, the SHR, 33 urban counties for one cross-section, and Colorado Springs. The issue of under-ascertainment bias would conceivably hold, and maybe more so, for this select sample. Thus we interpret their estimates to be, at best, a lower bound. Our estimate of a 10 percent reduction in female homicides does suggest, though, that ERS created an overwhelmingly safe environment for female sex workers — perhaps the safest in history. PAGE 16- 17

What is the mechanism linking ERS to decreased murders?

Given the robustness of our homicide result, we investigated The Erotic Review more carefully to determine whether there was any evidence for screening and shifting away from higher risk activities. We focus on several measures which we believe can help shed light on our results.  We propose three mechanisms that link ERS to declining violence. Our possible mechanism is that ERS leads to greater market efficiency which leads to more repeat business (or both). We call this the “efficiency effect”. The second possible mechanism is that the sex worker’s work environment is becoming safer due to sex workers moving solicitation itself from outdoor street work to indoor work. We call this the “composition effect”. The composition effect speaks to changes in entry, while the efficiency effect speaks to changes in the matching technology linking sex workers with clients. The final mechanism is that the Internet allows for the sex worker to increase screening, which we call the “screening effect”. We can evaluate both of these, albeit somewhat indirectly. PAGE 20

In this study, we find that the expansion of Craigslist’s ERS was associated with declines in female homicide rates. We speculate that this may be driven by increased screening, greater efficiency in the market, and the shifting of sex workers from street locations with greater environmental hazards.  While we do not find evidence for the screening effect, we do find evidence consistent with the efficiency and composition effects. The findings in this paper point to several potential positive impacts of allowing illicit sex workers to solicit through an online platform that enables improved efficiency and changes in the composition of the indoor/outdoor markets. One of these benefits is cost-effectiveness. Putting the magnitudes into context, we compare our estimates to the cost of achieving the same reductions in murders using an alternative mechanism: the hiring of additional police officers. How many more police officers would need to be hired to reduce female homicides by 10 percent? Evans and Owens (2007) estimate the police-murder elasticity to be -0.84, which implies a police force employment increase of 12 percent.   We calculate the size of this counterfactual police force expansion using data from the 2001 LEOKA data (the year prior to ERS opening in the San Francisco Bay area),  and aggregate the number of police and the size of the population. In total, there were 1,003,441 total police employed, a population of 289,627,938 in 2001, and the number of police per 100,000 equalling 346.5. To find the number of additional police, we increase the police by 12 percent which gives us 1,123,854 employed police officers, an increase of 120,413 police officers. Assuming an annual outlay of $100,000 per officer, reducing female homicides by 10 percent would cost society an additional $12 billion per year using higher levels of police employment. Craigslist ERS achieved the same result, in other words, and saved 1,400 female lives at a fraction of the cost of doing so using an increase in policing.

Our study suggests that dialog must occur regarding the costs and benefits of anti-ERS enforcement. We suspect that this dialog is likely to require more nuance and sensitivity than has previously been the case, though, as ERS may increase the size of the prostitution market while simultaneously reducing violence. For example, we find strong evidence that ERS increased the proportion of independent sex workers and the number of reviews at The Erotic Review, even as it reduced violence against women. ERS had a major disruptive effect on the illicit market for commercial sex in the United States despite the nation’s prohibition of prostitution. It is likely that ERS reduced many dimensions of risk and this, in turn, was responsible for both the market’s growth and the decline in violence.  A more detailed investigation into the effect of ERS on serial killer activity in the US would potentially provide considerable value for understanding the repercussions of ERS in specific areas. There is still a great deal of research required in this area. In addition, there are other important issues relating to the relationship between technology and sex markets that have not been analyzed. One opportunity for future research is the relationship between ERS and incidence of human trafficking. Unfortunately, the data does not presently exist that would enable us to answer this question. PAGE 25-27

On April 11, 2018, President Donald Trump signed into law the Fight Online Sex Trafficking Act (FOSTA) which directly amended §230 of the Communications Decency Act. FOSTA removed the amnesties websites enjoyed under CDA §230 by making websites criminally responsible if their website was used to facilitate prostitution or sex trafficking. Penalties were upwards of ten years in prison. Contemporaneous to its signing, the DOJ seized Backpage and arrested numerous employees including top executives. Almost overnight, the elaborate network of websites facilitating illegal sex markets was disrupted – from extremely influential websites shutting down to prominent sites blocking US-based IP addresses. As the closure of the sites occurred across the country at the same time, a difference-in-differences research design like ours cannot be performed to understand the impact that the law has had on public safety. The data itself is still years away from being made available for research. At present, we only have personal accounts made public through qualitative representation. Several newspaper reports suggest that FOSTA has indeed made sex workers’ lives more dangerous by pushing them towards street work and pimps, as well as by removing screening as a convenient tool for predicting client violence (McCombs, 2018; Witt, 2018). Even police are reporting an increase in street prostitution following FOSTA.37 FOSTA supporters hope that by shutting down Backpage, Craigslist’s successor, as well as the myriad of websites pertinent to the illicit market, coercive sex work will be fundamentally disrupted. But the disruption of sex trafficking is not theoretically obvious under FOSTA. First, FOSTA did not provide resources to fragile families, so victims of abuse including runaway teens do not receive direct or indirect assistance such as housing. Thus the supply chain containing domestic trafficked victims is not disrupted by FOSTA. Second, whereas prior to FOSTA victims of trafficking could be identified and recovered at least in principle since they were trafficked on visible platforms, it is unclear that that can happen as often or as easily under FOSTA. Whereas children were recovered when police identified them on Backpage and Craigslist, it may be increasingly difficult to reunite them with families if solicitation moves to more clandestine solicitation channels.38 Another prediction is possible – one that is considerably bleaker than that painted by hopeful legislators, celebrity activists, and some law enforcement. Insofar as FOSTA represents a major disruption in the matching markets linking safe clients to sex workers, then we might anticipate two effects. First, the marginal sex worker will leave the market if FOSTA causes her profits to become negative. Exiting may also be sub-optimal if the next best alternative is considerably worse from the worker’s perspective. Thus we expect some exit under FOSTA, though how much depends on the elasticity of supply. Exiting sex workers following FOSTA  are by definition the most elastic group of workers in part because they have alternatives which they find relatively acceptable. The women who do not or cannot exit are inelastic to FOSTA because they lack such outside options, and we expect that for these inframarginal sex workers, hardships under FOSTA will be considerable, which may include choosing to work with pimps, falling into predatory relationships with traffickers, and facing heightened risk of death and physical violence at the hands of unsafe clients who may have gained the upper hand without adequate screening. In summary, we find support for sex workers’ claims that the introduction of ERS made them significantly safer. We estimate that ERS led to a 10-17 percent reduction in female homicides. These negative effects on female homicides are consistent with theoretical predictions made by Logan and Shah (2012) and Persson and Lee (2016), suggesting that Internet platforms like Craigslist’s ERS improved market (and potentially non-market) participant safety. While opposition may persist despite these gains due to “distaste for certain kinds of transactions” (Roth, 2007; Gu, Roth and Wu, 2018), or because prostitution is viewed as equivalent with sex trafficking, the potential improvements in female safety illustrated by our results suggest that it is important for policymakers to design policies that might improve the lives of trafficked victims without simultaneously harming others. PAGE 27- 29

The results cited in the After Fosta impact report were gathered by COYOTE RI,  The purpose of this survey was to assess the immediate impact of congressional bills FOSTA and SESTA on the safety of people in the sex trade. This survey also examines the effect of the FBI seizure of Backpage on people in the sex trade. This data was collected from  4/14 – 5/25 2018. The data included here are drawn from this timespan, though the survey is still open. Total Participants at the time of the survey was analyzed: 262. 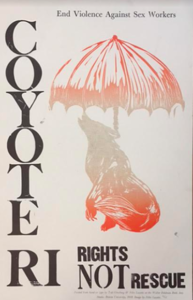