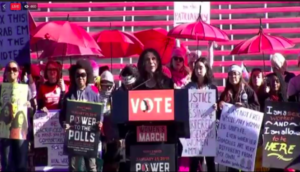 I am a mother, I am a grandmother, I am a great-grandmother, and I am a sex worker. As I stand here today, I look out and wonder how many of us, intentionally or unintentionally, place our boots on our sisters’ necks? That under the crushing weight of patriarchy, we divide, we separate, and we silence one another. The learned processes of morality and judgment and laws that holds us down, keep us from speaking with one another, keep us from standing together, and keep our gaze from envisioning a rights-based world where equality equals reality. These teachings are deeply ingrained in the fabric of our herstories, and we cannot escape them. But now, we stand in a timed place of history that we must unlearn these belief systems. Because, if we pretend the hierarchy does not exist within us, we continue to divide and separate and silence one another. We will continue to center the selected few to the battle cry of #MeToo and #TimesUp and #AllWomen, and it becomes a moot point to those this very space loudly quiets down. Our responsibilities are great to one another and we must ask ourselves the hard question of what has been accomplished untying the knots, if we continue to hold on tightly to the rope. 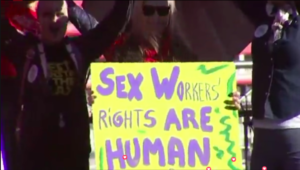 I want us to see the sex workers rights movement as part of the solution and not the problem. We are a strong and fierce community made up of every color, every race, every identity, every shape, every economy, every religion, and so much more. Sex workers have been to the United Nations, we’ve been to the White House, we’re currently in the 9th circuit fighting for full decriminalizaton, we’ve been given national and global audiences, and we get IT done!
When we literally lay down our bodies to be arrested on the Senate floor for healthcare, when criminalization still affects people who are living with HIV and AIDS, when the courts continuously hammer down on reproductive rights, health, & justice, when raped women still stand on she said/he said platforms, when accessible childcare is still absent, when trans voices are screaming to stop killing them, when women still pay the price of being a wife and mother versus a thriving career, when sex is criminalized in the legal and moral courts, when families become homeless because their paychecks cannot meet the rising cost of gentrifications, when women still take home less pay than men, when children go hungry in the most developed nation in the world, when people of color are incarcerated in the United States at percentages that far exceed any global percentages of incarceration, when blood for oil destroys native lands, when city waters are poisoned and undrinkable, when groups of people are deported for dreaming… When the government is brutally attacking everything we have fought for: On the front lines, you will be standing right next to a sex worker. 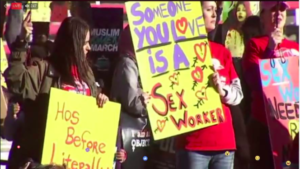 In my time, I have seen many things. I have lived through the generations that fought in the streets for the recognitions and rights we have today. And now, I live with the generation that will carry the same burning torch – farther and more furious. I applaud every woman here today. Stand in your truth not in your judgement. Stand with each other and ask one another “Is my boot on your neck? 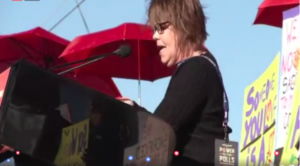 This is my truth as I live it. I no longer give anyone permission to see me as less than. Don’t dismiss my womanhood. I am a sex worker. I am allowed to be here.
Use your vote wisely! Live in your Truth! Burn it all down and Rise among the ashes! 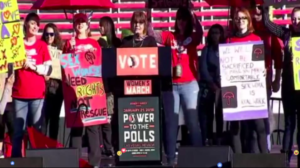 Thank you, Cris Sardina from Desiree Alliance for speaking for ALL sex workers at the National Women’s March in Las Vegas. Here is the speech in case you missed it!