The passing of Fosta (Fight Online Sex Trafficking Act)  is a hate crime. Congress is trying to kill Sex Workers!

Following the passage of SESTA,  a sex worker-led organization COYOTE-RI conducted an impact survey and documented 260 responses (and growing). The data is still being collected and analyzed, but we have some clear takeaways that must be shared: 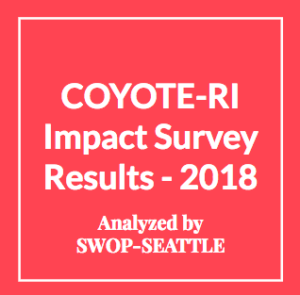 Of the 260 sex workers who responded to the survey…

Within 2 Weeks of Backpage Shutting Down…

– 25% (65 people) reported being unable to support themselves or their dependant’s because their source of income was gone.

– 30% of participants report having stopped screening clients or having lowered their safety standards.

– 60% (156 people) report having taken sessions with less safe clients, out of financial desperation

– Between 6-10% of participants were evicted

We are still processing the data to illustrate how many sex workers are being approached by pimps, who see this new environment as ripe for taking control. With online advertising, sex workers have been able to work independently, but now that this tool is gone, the pimps are starting to harass newly vulnerable sex workers. 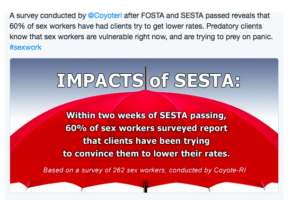 Internet sites allow sex workers to screen potential clients, stay informed & to be safer. Why don’t you actually listen to the data or to the sex workers themselves? Who do you think will step in if sex workers can’t independently use the internet to find clients? 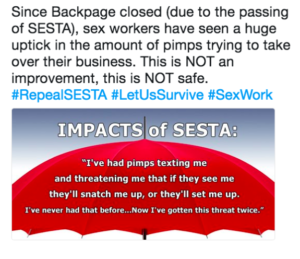 Thank You to SWOP Seattle for helping to analyze the data and creating the images.

There is a solution, Backpage RI is gone. Try Crockor.nz

Sex Trafficking and the Sex Industry in the United

The Deadly Consequences of the Anti-Sex Trafficking Law”