On June 17th Cranston Police and the Department of Homeland Security, which houses ICE, carried out coordinated raids on six Asian Spas. A recent episode of The Blue Campaign featured an Immigration and Customs Enforcement Agent and a representative from the National Human Trafficking Hotline explaining how the Human Trafficking Hotline assists ICE. Clips from that episode are available here:

After the June 17th raids, 11 women were charged with practicing massage without a license. One woman was charged with pandering, a fuzzy Rhode Island statute that encompasses conduct as diverse as inducing someone into prostitution, renting to a prostitute, or permitting prostitution to occur. News sources reported that police said the charge was for permitting prostitution or for having a place of prostitution, but the criminal complaint alleges that Woo “did unlawfully, by the promise of threat or abuse of person or device or scheme, cause, induce, persuade, and encourage [a victim] to become a prostitute and enter upon and lead a wanton and dissolute lifestyle.”

The victim’s name was not redacted in the Criminal Complaint provided to COYOTE RI. It is unclear how many of the women” rescued” will be deported.

Although news sources heavily implied the women were victims of sex trafficking, no one has been charged with trafficking. One Cranston “Karen” called COYOTE RI and left a message that 2 fifteen-year-old girls had been kidnapped, and had been found chained to a bed, but there have been no charges filed or statements by police to support this claim. The Karen said that she found COYOTE’s number by opening her neighbor’s mail, which appears to be a federal crime.

Despite the reporting about the women being victims of sex trafficking, GoLocalProv published their full names and addresses.

After the raids, it came to light that one of the buildings was owned by a Rhode Island power couple – the Administrator of the DMV, who was a police officer for 26 years, and the Director of House Policy. News sources report that the property was raided for prostitution in 2017 as well, implying that the owners should have known about the sex work allegedly occurring there. The owners may also be vulnerable to charges under Rhode Island’s overbroad pandering statute, which includes owning a place of prostitution.

Cranston Police Chief Michael Winquist told 12 news that in the future he will act faster to get sex workers and sex trafficking victims evicted: “Going forward, for these types of operations, we will be contacting the property owner with the hopes they will evict tenants using their premises for criminal activity.”

“These kinds of laws are sold to the public as helping sex workers and sex trafficking survivors, said Tara Burns, COYOTE’S Research Director. “But eviction doesn’t help. Making landlords felons if they rent to us leaves us unhoused and vulnerable to pimps and other exploiters who will take us in after the law has left its scarlet letter on us.”

On June 28th, local police departments worked with the FBI to again raid multiple locations, reportedly in connection with prostitution activities. This resulted in three people charged with Pandering. It is unclear whether they are accused of simply renting to sex workers or of permitting prostitution. GoLocalProv reports that two women were arrested and that police then transferred custody of them to social services. Again, the women taken into custody were portrayed as trafficking victims, although no trafficking charges have been filed.

While no traffickers seem to have been arrested or charged, workers, cast as victims, have been charged with misdemeanors and felonies, will face discrimination in housing and employment for the rest of their lives, and may face deportation. 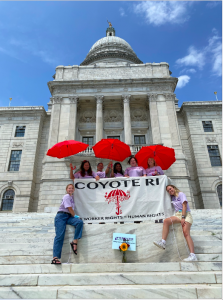