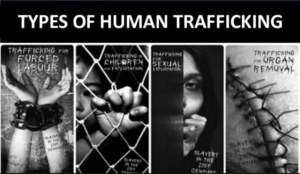 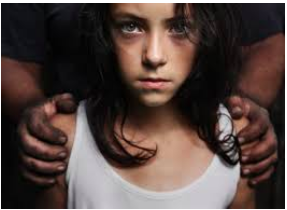 Wait for it —- February 2018: Trump Campaign Co-Chair Sentenced to 20 Years for Trafficking Minors and Sexual Abuse Some of his criminal behavior occurred during the campaign. ByTom Boggioni / Raw Story 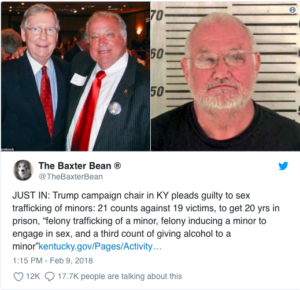 According to the report, Nolan, 71, a former judge, used drugs and threats of arrest to force women and girls under the age of 18 into sex acts. Pleading guilty to 21 of the counts filed against him — for crimes committed dating back to 2004 — Nolan accepted a plea deal where he will serve  20 years in prison and pay a $100,000 fine, becoming eligible for parole in four years, his attorney stated. Some of the incidents occurred in the summer of 2016 while Judge Nolan was serving as the chair of the Donald Trump campaign in Campbell County, KY. Nolan served as a district judge in the late 1970s and early 1980s, and had just been elected to the Campbell County School Board in 2016 prior to being indicted. According to a report read by Judge Kathleen Lape, Nolan paid some victims with heroin and painkillers in exchange for sex and threatened at least one victim, who lived on his property in southern Campbell County, with eviction unless she performed sex acts on him. Additionally, Nolan told some of his victims — some under the age of 18 — that he would turn them into to the FBI if they didn’t comply with his demands.

Nolan faced more than 100 years in prison on 28 felony charges, including four counts of human trafficking of a minor.

Meanwhile if you are a black man in Rhode Island and you are accused of sex trafficking, you get sentenced to 100 years. No parole in 4 years for this man. The police crucified this man with claims that he has been a pimp for years and they couldn’t shut his business down. The Providence Journal played their part by labeling the man as  “The Devil incarnate” 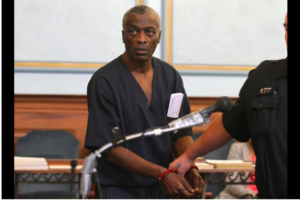 Yet Rhode Island police didn’t have any problem going after vulnerable undocumented workers. 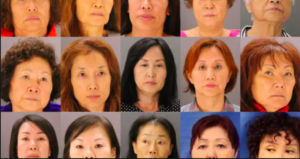 On October 26, 2016, anawards ceremony was held at the Providence Career and Technical Academy to honor police officers in Rhode Island for their “kindness and community policing.” Among the major achievements highlighted by this ceremony was the crackdown on 15 massage parlors in Rhode Island, which police say were fronts for million-dollar sex trafficking operations. What these accounts of “kindness” fail to mention is that these 15 massage parlors were run by small groups of immigrant sex workers, who worked together and shared this space in order to ensure their safety. Shutting down massage parlours did not result to more safety for these women, but instead, to more isolation, marginalization and deportation.

Updated on July 8th, 2018 when a 2st person from the Trump campaign is charged with child sex trafficking.

Ralph Shortey, a former Oklahoma state senator who last year served as Donald Trump’s campaign chair in the state, was meticulous about keeping up his reputation as a pious man, according to several fellow Oklahomans. That reputation, however, has all but disappeared. According to Shortey’s attorney, the former Republican lawmaker will plead guilty to one count of child sex trafficking on Nov. 30.

Shortey, a 35-year-old married father of three, resigned from the state Legislature in March after being charged with several felonies, including engaging in child prostitution, after police found him in a hotel room with a 17-year-old male. Shortey’s attorney, Ed Blau, confirmed that his client will plead guilty to a charge of child sex trafficking in exchange for U.S. prosecutors’ dropping three child pornography charges against him.

“Mr. Shortey feels this is a necessary step in putting this painful and humiliating ordeal behind him, for both himself, his family and for the state of Oklahoma,” Blau told local news site NewsOK on Friday.

Blau did not respond to NBC News’ requests for comment.

While the age of consent in Oklahoma is 16, child prostitution statutes apply to anyone under 18. Shortey faces a minimum of 10 years in prison on the child sex trafficking charge.

According to court documents, Shortey and the unnamed teen referred to as John Doe, connected on Craigslist in or around February 2016. From then until March, the documents state, Shortey “obtained at least one image of John Doe’s penis.” Then, on or around March 8, the teen messaged Shortey saying, I need money for spring break.” The then-lawmaker asked if the teen would be interested in “sexual stuff.”

Following a tip from John Doe’s father, police went looking for the teen at a Super 8 Motel in Moore, Oklahoma, on March 9, at a room rented with Shortey’s driver’s license and credit card. When officers knocked, Shortey told them he and the teen were getting dressed.

The report also stated Shortey was in possession of child pornography that “depicts a man engaging in sexually explicit conduct with a prepubescent girl.”

For LGBTQ advocates in the heartland, Shortey’s fall from grace exposed the “family values” politician as a hypocrite. Troy Stevenson, executive director of the LGBTQ organization Freedom Oklahoma, said he knew Shortey as a person who cared a great deal about maintaining his image as a good Christian lawmaker.

Stevenson described one encounter with Shortey ahead of a vote on an anti-transgender “bathroom bill” in which the lawmaker allegedly told Stevenson that while he couldn’t vote against the measure because it would inflame his Christian base, he would abstain.

“Then, not 12 hours later, he sits in the committee and voted in the bill,” Stevenson lamented.

This was not the first time Shortey voted against the state’s LGBTQ community because of his Christian beliefs. He routinely voted with his Republican colleagues on bills targeting gay and transgender people, including a measure passed earlier this year that would allow business owners to discriminate against gay people.

Shortey is not the only social conservative who has taken a recent fall from grace either. Wesley Goodman, a Republican and first-term state representative in Ohio, resigned on Nov. 14 because of “inappropriate behavior.” Several local news outlets, including The Cleveland Plain Dealer and The Columbus Dispatch, reported Goodman — a vocal proponent of “natural marriage” — was caught engaging in sexual activity with a male visitor in his legislative office. The New York Times and The Washington Post also reported on Goodman’s allegedly inappropriate behavior with young men.

“I’ve seen it in both parties, but there are these ultra right-wing politicians trying to prove their piety and running on issues of moral superiority while having behind-the-scenes lives,” Stevenson said. “They don’t think anyone is going to catch them.”

Stevenson said he does not believe Shortey’s sexual orientation is worth delving into.

“We’ve made it very clear that this isn’t about him being gay. It’s about him being a child predator and a sex trafficker and a hypocrite,” Stevenson said. “He was also caught with child pornography of both males and females of a much younger age. He’s an equal opportunity predator.”

The gig is up. The government now admits that they don’t see any difference between trafficking victims and sex workers. They see both as criminals; women who refuse to conform. Poor women that refuse to live in poverty and become homeless. Mothers that struggle to pay their rent and feed their kids are all seen as criminals. Services should never have required anyone to prove that they were a victim. Services should be for all people who are living in poverty. However, the government invented the trafficking narrative so they wouldn’t have to provide any services for sex workers and they only had to pony up when it came to legal services for victims. So when you do-gooders think that snitching on sex workers will somehow to rescue them for trafficking, all you are doing is sealing their fate with criminal records so they can never leave the sex industry. If you are an undocumented trafficking victim, good luck getting a T visa in this climate. 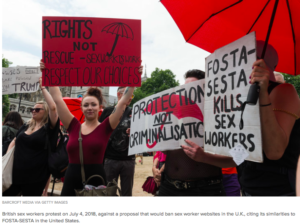