We are writing to you today in opposition to the EARN IT Act- Eliminating Abusive and Rampant Neglect of Interactive Technologies (The EARN IT ACT) Senate Bill 3398. We urge you not to support or co-sponsor the EARN IT Act, which the Judiciary Committee is voting on next Thursday, July 2nd, 2020.  This bill would compromise the security of people around the world especially marginalized low-income women, such as sex workers, women of color, transgender women, LGBTQ,  undocumented women, and young people.  The passage of FOSTA/SESTA in 2018 was a grave mistake that destroyed the lives of many and instead of making it right, the same actors are trying to make it worse. PLEASE do not let this happen again.

Within 2 weeks of FOSTA’s passage into law, COYOTE RI conducted a survey that reached 262 US sex workers.  The data revealed that violence and exploitation increased while screening and safety decreased.  Some sex workers became homeless and were forced into the streets. See our impact report here.

Recently FOSTA/SESTA was used for the first time since it was passed 2 years ago:

With the prosecution announced last week in Texas, Sesta/Fosta has at last been used against the kind of website envisioned by Congress when it passed nearly unanimously in the Senate and with a wide majority in the House. It only took them two years. One of Sesta/Fosta’s architects, Republican Senator Rob Portman, put a press release about the CityXguide raid, echoing the allegations that a trafficker had been put behind bars. “Sex traffickers who sell women and children online must be held accountable for their actions,” Portman stated, “and I applaud today’s action by the Justice Department against CityXGuide.”

As has been the case all along in the war on human trafficking, and only more so under the current administration, a press release announcing victory with the passage of a new law or the unsealing of a criminal indictment will garner far more attention than how the law is used in court. What matters, seemingly over even doing right by people who are trafficked, is the optics. And since the consequences of these laws and crackdowns most harm sex workers, the damage is still largely overlooked by legislators and, certainly, by law enforcement.

It was also two years ago this month that sex worker rights advocates and allied human rights organizations took the government to court over the law that the Justice Department has finally seen fit to use. Their constitutional challenge to Sesta/Fosta drags on still. Meanwhile, one of the organizations that brought the suit, Sex Workers’ Outreach Project (SWOP) Behind Bars, has been made the subject of an FBI “Situational Information Report,” after a woman was arrested on prostitution charges in 2019 and agents searching her phone found an email from the group. The report from the FBI’s Jacksonville division (and obtained by The New Republic), titled “Listserv Email Containing Screening Tips and Warning about Operation Cross Country for Sex Workers, as of July 2019,” goes on to quote the email alerting sex workers to the possible law enforcement operation. The email also referenced a safety planning sheet, as SWOP Behind Bars described it, “just in case you find yourself trapped in a sting.”

The FBI report goes on to quote SWOP Behind Bars’ other safety tips, like, “If you have a local bad date list, read it before heading out! Even if you don’t remember everything, something might make you double-check before you head out with someone.” A “bad date list” is something sex workers have created themselves, in part because law enforcement does not take violence against sex workers seriously. Here, it receives their attention, but only insofar as it is perceived as a sign of criminal activity. (The New Republic asked the Jacksonville FBI division office to authenticate the document, but it did not respond by the time of publication.)

Sex workers had feared that such lawful harm-reduction work could be criminalized, if not under Sesta/Fosta specifically, then as a result of the environment the law produced—one in which any online communications platform could be painted as “facilitating prostitution” if it was a venue for sex workers to talk about how to stay safe at work. ( By Melissa Gira Grant “The Justice Departments Fake Fight Against Sex Trafficking” link)

It is disconcerting how homeland security and the FBI are still harassing sex workers despite being in the midst of a global pandemic when a majority of sex workers are out of work and were unable to access anything from the CARE Act.  COYOTE RI has processed the applications from 158 RI sex workers and paid out over 33,000 indirect aid to them since March 31st, 2020.  Will the FBI create a Situational Information Report on COYOTE RI next?

Many legislators, like Rep. Ro Khanna (D–Calif.) are now apologizing for voting for FOSTA/ SESTA stating: “We need to better understand, how the shutting down of these websites has endangered sex workers.”  Rep. Ro Khanna is drafting legislation that would study the effects of FOSTA, the bipartisan “sex trafficking” bill that bans hosting any web content promoting prostitution, but sex workers think this is just lip service. (Washington Babylon “Sex Workers Enter The National Landscape As Presidential Candidates Consider Sex Work-Study”)

COYOTE RI has emailed Rep. Ro Khanna’s office several times and has yet to receive a response.  We have partnered with the Center for the Study of Slavery and Justice at Brown University human trafficking research cluster to conduct a 145 question survey on 1515 US sex workers in 2017. Our health and policy advisor wrote her 2018 thesis on the HIV and sexual health part of this survey.  Then she went on to create a continuing medical education course for RI medical providers, in collaboration with COYOTE RI, The ST James Infirmary, Miriam Hospital HIV & STD Clinic, and Lifespan.

Rep. Ro Khanna’s sex work-study did not provide any funding to study the effects of FOSTA, nor does he explain how they plan to survey sex workers, nor is his office willing to review evidence-based research that was conducted by COYOTE RI that has been archived at  Pembroke Center for Teaching and Research on Women, COYOTE RI Collection. #NothingAboutUsWithoutUs

In 2014 COYOTE RI tried to schedule a meeting with your office. After 3 months we were finally offered a meeting with your policy advisor Rele Abiade to discuss our concerns about The SAVE Act HR 285, which passed in the house on January 28th, 2015.  Mrs. Abiade refused to review any of the information we provided and wasn’t interested in how many sex workers were victims of violence and corrupt police, instead she justified this by stating “one trafficking victim was too many.”

In 2019 we emailed your office with our concerns regarding FOSTA/SESTA and received an automated message stating how concerned you were about sex trafficking, and yet it was very clear that you didn’t understand the issues.

Your office was not willing to review any of the EVIDENCE based research regarding how these types of uninformed and ultimately harmful laws fuel sex trafficking. When sex workers can’t report violence and predatory police officers those bad actors continue to abuse women.

We feel that it is time for your office to schedule an appointment with COYOTE RI so we can educate you and your staff about these issues.

The History of Sex Work Law in Rhode Island

RAPISTS WITH GUNS AND BADGES 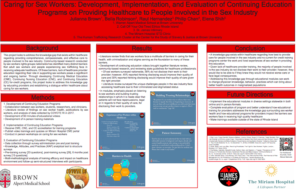