COYOTE RI fully supports #BlackLivesMatter protestors and all other anti-racism activists who have taken to the streets across the country after the tragic murders of George Floyd, Breonna Taylor,  Ahmaud Arbery, Sean Reed, Tony McDade, and countless other members of the black community.  We stand with the families and all other victims of structural racism and the extraordinary levels of violence it encourages and condones against Black Americans and our immigrant brothers and sisters.  COYOTE RI understands the most vicious manifestation of that violence to be the US prison system, which feeds of police brutality.

The history of anti Blackness in America runs deep, and there is no immediate end in sight. Black Americans have survived a history of chattel slavery, the lynchings of the Jim Crow era, being denied basic access to equal wages, housing, and education, and all of these heinous acts of racism have historically been defended by the same law enforcement communities are being protested today. Racism in policing has been evident, and the results are mass incarceration of the Black community, murders of Black civilians, innumerable cases of police brutality, and extreme surveillance of Black communities.

We are moved by the masses, in cities across the country, who are invoking their right to protest against these persistent forms of structural violence. These protests, initiated by righteous Black and Brown people, have been joined by people of all races. It is intolerable that they are met with tanks, tear gas, and rubber bullets, as well as with white supremacists infiltrating their marches and attacking their community institutions.

As an organization that has focused on working with the most marginalized members of our community, anti-racism education and training are at the forefront of our core mission. For this reason, we are proud to stand in solidarity with communities of color, and especially with the Black community in these times. Our primary goal is to create an anti-oppression framework while advocating for social justice for all. This goal simply cannot be achieved if we do not include standing with victims of police brutality and victims of racism.

While COYOTE RI,  has historically focused on serving sex worker based communities, we still recognize the importance of intersectionality, and the need for broad, coalition-based anti-racism activism; therefore we stand with all anti-racism protestors in these times. Many of our own community members have consistently been in danger of police violence and over surveillance due to their work, activism, and their very public presence. Many sex workers have long suffered from police violence for merely existing. Sex workers, especially the Black, Trans, and migrant sex workers within our community are all too familiar with being targeted, abused, and dehumanized by law enforcement. We refuse to be silent about these abuses. We refuse to be silent about police brutality. Our stance is that ALL VICTIMS OF POLICE VIOLENCE DESERVE JUSTICE.

Despite the inherent racism of law enforcement and the legal system, the Black community has survived and will continue to fight for freedom, dignity, and respect. The struggle is far from over, and COYOTE RI is proud to stand among our friends and allies in this fight.

Our work must be more than to simply acknowledging that racism is bad; we must actively engage in anti-racist work, and one of the ways to do so is to stand with our community, allies, and those who need our support in this era.

We stand with the Black community and all protestors. And we do it proudly. 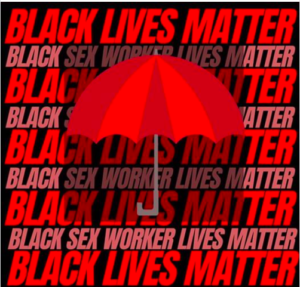