The Nature and Extent of the Sex Industry in New Zealand: An Estimation- 2005

It’s as legal as any other job. So why does stigma against sex workers persist?  August 6th, 2018

No trafficking in NZ sex industry but migrant abuse is widespread, the report finds= April 17th, 2018

The judicial system and sex work in New Zealand Jan 2018

Can the police ever be friends to sex workers? Nov 7th, 2017 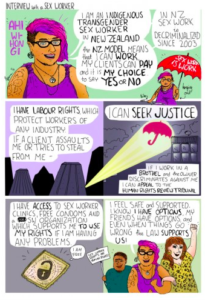 NZPC’s own website updates regularly with answers to some frequently repeated myths.

Recently (2017) there has been some media coverage on (failed) efforts to create bylaws in attempt to move street-based workers, who were originally displaced by the earthquake, from certain residential areas.  NZPC will have the latest on this, but here is a sample of the coverage –

From Law Enforcement to Protection? Interactions Between Sex Workers and Police in a Decriminalized Street-based Sex Industry-2016

Decriminalising sex work in New Zealand: its history and impact-2015

In 2013 there was a thorough review of the PRA by the NZ Justice Committee, which strongly rejected a petition calling for the ‘Swedish” model instead. See Wikipedia link above, or follow this link to jump straight to the Justice Committee’s 2014 “Full evidence text” pdf:

For a 2007 study, Abel interviewed 772 sex workers from around the country and found 73 percent worked for the money, 87 percent regularly visited the doctor but only half announced their occupation, and 60 percent thought the police cared for their safety.

Decriminalising sex work in New Zealand: its history and impact

The ethics of prostitution: Selling sex out of the shadows