After 68 Days, Hunger Strikers in ICE Custody Are on the Brink of Death– January 9th, 2020

‘The lion has awoken’: indigenous people of Bolivia rise up against imperialist coup November 15th, 2019

GOVERNMENT MUST HAVE REASONABLE SUSPICION OF DIGITAL CONTRABAND BEFORE SEARCHING ELECTRONIC DEVICES AT THE U.S. BORDER- November 12th, 2019

“YOU WON’T BELIEVE WHAT HAPPENED”: THE WILD, DISTURBING SAGA OF ROBERT KRAFT’S VISIT TO A STRIP MALL SEX SPA- November 2019

Migrating out of Poverty- October 2019

The Philippine Sex Workers Collective: Struggling to be heard, not saved-August 2019 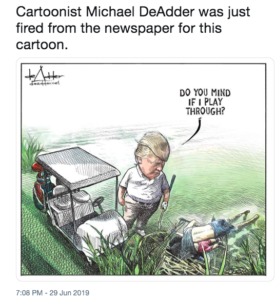 Thailand Banks on Tech to End Slavery at Sea as Workers Push for Rights -June 26th, 2019

I’M A JOURNALIST BUT I DIDN’T FULLY REALIZE THE TERRIBLE POWER OF U.S. BORDER OFFICIALS UNTIL THEY VIOLATED MY RIGHTS AND PRIVACY- June 22nd,2019

The remote villages of Denmark with over a thousand Thai wives -May 24th, 2019

How ICE Is Using Solitary Confinement to Punish Asylum Seekers, Including LGBT & Disabled Immigrants -May 22nd, 2019

Rights not rescue for migrant sex workers– May 11th, 2019

Scott Warren Worked to Prevent Migrant Deaths in the Arizona Desert. The Government Wants Him in Prison.-  May 4th, 2019

What happens after victims of trafficking return to Nigeria? -April 2019

Australian Aboriginals to get billions in compensation for land & spiritual loss in landmark case -March 15th, 2019

Future of work roundtable: how has the world of work changed?-  March 1st, 2019

The Stories of Migrants Risking Everything for a Better Life -January 24th, 2019

The most powerful currency today

Why shelter homes feel like prisons for sex trafficking survivors, and how to change this–December 7th, 2018

Why Marronage, not Slavery? The Case of UK Hand Car Washes- November 28th, 2018

The issue of forced institutionalization of adult women in shelter homes- November 27th, 2018

From brothels to independence: the neo-liberalization of (sex) work -November 7th, 2018

Nosy do-gooders policing the Nepal-Indian borders to make sure women are not migrating, to engage ins sex work, while claiming that they are catching traffickers red-handed. Aug 3rd,2018

“Separating children from parents in the name of “anti-trafficking in Barcelona” July 27th, 2018

Not just Trump: India has separated Bangladeshi children from their parents for years-July 3rd, 2018

Diplomats Are Getting Away With Abusing Their Children’s Nannies- May 21st, 2018

“I Want to Be Trafficked so I Can Migrate!”: Cross-Border Movement of North Koreans into China through Brokerage and Smuggling Networks- Feb 21st, 2018

When Deportation is a Death Sentence: The Fatal Consequences of U.S. Immigration Policy- Feb 6th, 2018

Beyond ‘maids and madams’: can employers be allies in new policies for domestic workers’ rights? Jan 30th, 2018

Allies or co-conspirators: what does the domestic workers’ movement need? Jan 30th, 2018

Understanding the interpersonal and the structural context of domestic work- Jan 29th, 2018

Eight reasons why we shouldn’t use the term ‘modern slavery– Oct 17th, 2017

Not gay enough: the bizarre hoops asylum seekers have to leap through- Dec 9th, 2017

Beyond ‘raid and rescue’: time to acknowledge the damage being done KIMBERLY WALTERS November 25th,  2017

Eight reasons why we shouldn’t use the term ‘modern slavery’- October 17th, 2017

Do the Hidden Costs Outweigh the Practical Benefits of Human Trafficking Awareness Campaigns?

The thorny ramifications of the Modern Slavery Act  -Sept 26th, 2016

Slavery in the US prison system  If you want to find an example of modern day slavery, look no further than US prisons. September 9th, 2017

My body is my piece of land. Stories of migrant sex workers often cast human smugglers as the villains, yet the biggest evil many migrants face is their hopeless debt in their home country.  by SINE PLAMBECH September 29th 2017

How refugees are fighting back against border controls

Demand for wives in China endangers women who live on its borders– Nov 4th, 2017

⭐ WONDERFULLY CRAFTED STORY. THOUGHTFUL IDEAS. August 31, 2017. Read the review of The Three-Headed Dog by Claude d’Estrée, Director of the Human Trafficking Center at the Josef Korbel School of International Studies, University of Denver. A crime novel that broke the academic barrier! http://amzn.to/2hGQQJa 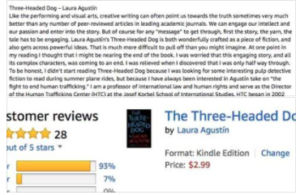 Could Trump be an ally in the fight against human trafficking? ANNE T. GALLAGHER July 4th 2017

SLAVE HUSBANDS OF HONG KONG: THE MEN WHO MARRY INTO SERVITUDE by  SYLVIA YU May 21st 2017

THE UNDERGROUND RAILROAD FOR REFUGEES At a safe house in Buffalo, asylum seekers from around the world prepare to flee the U.S. for Canada. By Jake Halpern  March 2017

When NGOs save children who don’t want to be saved Western media misrepresent voluntary child labour as slavery.   by Neil Howard

Rich in Funds but Short on Facts: The High Cost of Human Trafficking Awareness Campaigns

Raising Awareness: of What? for  What? by Whom? for Whom?

We need to hear the stories of exploited unlawful migrant workers, not just deport them February 28, 2017

Brexit as a driver of modern slavery? ANDREW CRANE 29 March 2017